There are three to four baboon troops which frequent Karoo Ridge Conservancy and YES they can be a terrible menace! 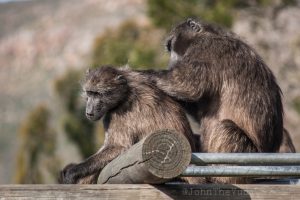 One troop in particular includes the lucerne lands and eco-lodge in their daily routine, often roosting in some cliffs near-by at night. Part of this tormenting routine (when there is no-one at the eco-lodge and apart from eating the lucerne) is chewing on outside furniture, chewing window frames, smearing dirty hands and faces on windows, throwing scatter cushions far and wide (occasionally taking them up the mountain), stealing solar lamps and generally swinging on anything which is vaguely swingable! We have, in short, supplied them with the most wonderful, exotic play and relaxation area!

Although it is believed that baboon populations are declining in South Africa there is every possibility that the baboon populations have increased in the Karoo. Population growth of any species is related to food availability and space.

SPACE….we have plenty of space!

FOOD…..well…..since farmers inhabited the Karoo there has been a permanent water supply – essential to a baboon. Not only have we provided water but we’ve increased their food opportunities. There are now crops to raid and small stock to steal, especially in times of drought. 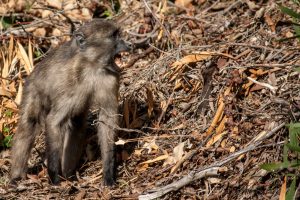 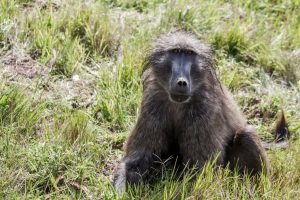 The last remaining influence is the lack of predators. Most certainly this was our doing too! In fact the last leopard in this area was killed about 100 years ago on a neighbouring farm called Brandvlei (Burn marsh).The leopard was hiding in the vlei (marshland) and the whole area was burnt to bring him out of hiding – hence the farm name. 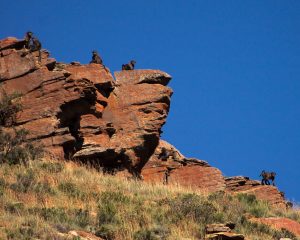 Baboons are very much apart of our lives here. Without realising it we see them or hear them every single day and it is nice hearing the familiar sound of a male barking from somewhere high up in the rocky hills.

One thing is for sure…there is no shortage of them here.