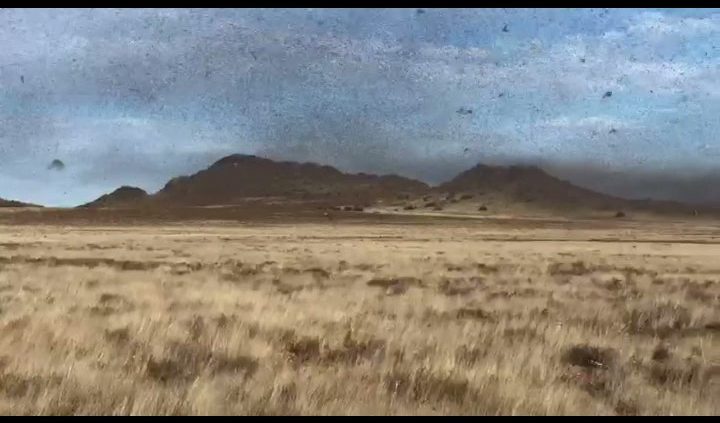 The Karoo is a place of extremes with one year never being the same as the next! It certainly makes life exciting! Every 11 years or so the conditions are right for the Brown Locust (Locustana pardalina) to swarm. This happens when the early spring rains synchronise the hatching of eggs which have remained in the soil over the long winter. 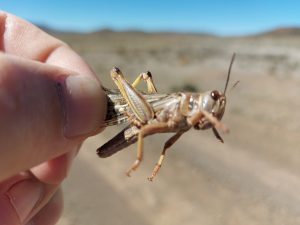 For years they have been considered a damaging pest and the government trains farmers to eradicate them at night using an insecticide to spray them. They can cause damage in large numbers particularly for crop farmers but they are actually predominantly grass feeders. While this may be hard for stock farmers to stomach, they are probably feeding on a lot of moribund/dead grasses at this time of the year which can be very helpful and at the same time are putting a lot back into the soil.

There are of course other little creatures in the whole ecosystem which should be considered when spraying insecticides, there is more than meets the eye, there are things going on in the background….

Meet the female sphecid wasp (Prionyx sp.). While these locusts are swarming, she is flying around preying on adult locusts. 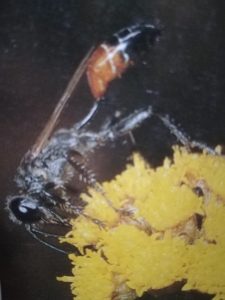 Picture from The Field Guide to Insects of South Africa

Meet the female Woolly bee Fly (Systoechus sp.). She is busy parasitizing any locust eggs being laid and her larvae are feeding on them. 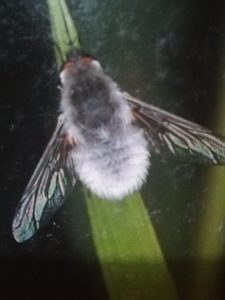 And then there is Stomorhina lunata and Wohlfarhtia euvittata both fly species which parasitize and live inside the hoppers/nymphs and are said to be capable of destroying a third of the locust population.

I have gone through areas where swarms have moved through Karoo Ridge and it is not noticeable. But we have noticed an increase in Cattle egret and Black stork sightings!

There is a time and place for everything and while broken swarms of locusts move through the landscape, I feel privileged to witness this phenomenon and see it as one more wonder of this vast, unique place we call home. For now, let the birds feast and the little woolly bee fly thrive!

Welcome to Karoo Ridge Conservancy!
With wide open spaces under African skies and clear, clean air in abundance, we are thrilled to be welcoming visitors again.

If you're planning your great escape, head to our Accommodation Page to read about the health and safety measures we are taking for Covid-19.

We'd love to stay in touch with all the news from the conservancy, and to let you know about our new conservation experiences and special offers. Please type your email address in the box below if you'd like to hear from us. And don't worry, we are working too hard out on the lands to bombard you with anything more than the occasional update!