The Sothern Black Korhaan (the Karoo Ridge Conservancy logo) is a unique bird. It is endemic to the southern biomes of South Africa –  Nama Karoo, Succulent Karoo and Fynbos – a relatively small distribution. It is not found anywhere else in the world. Historically it was a common bird in its chosen habitat but it is now listed as a VULNERABLE species. The population decline is thought to be because of habitat fragmentation due to an increase in agriculture but could also be related to an increase in crow numbers, who are well known for their disruptive behaviour, relentlessly bothering other birds. They steal little chicks and eggs which could have a major impact. More research is needed to clarify this theory.

Males are territorial and are generally seen alone. Being ground dwellers one only really sees them when they are disturbed or during displays. They are very noisy and have a very distinct call, similar to that of an old spitfire aircraft. Once you know where they hold a territory it is a very easy bird to find.
Females are much more difficult to see. Far more camouflaged and very secretive. When males are displaying they dangle their legs in flight and ”parachute” down to the ground while calling loudly. Females nest on the ground and take full responsibility of chicks with no assistance from the males.
Their diet is interesting as they are omnivores. They feed on insects, small reptiles as well as on plant material. 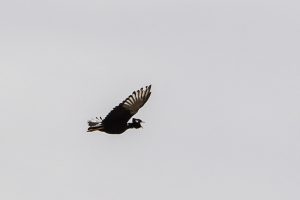 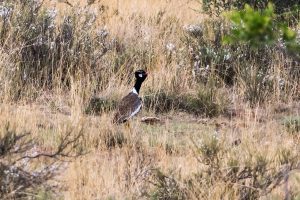