An obnoxious honking fills the air multiple times a day. The geese are on the march. Beady eyes follow me with suspicion as I move towards the basin with a 5L water bottle. Little hisses escape as the water pours in, they can barely contain themselves, but remain alert, lest I lurch at them suddenly and grab a skinny neck. As I back off, they rush the basin dipping greedily into the fresh water on offer, tipping heads back in relief, but the eyes never leave me, not once. 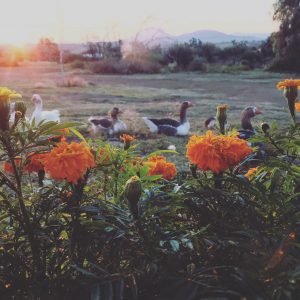 I have been here over 250 days.  I am alone and have taken to gathering the waifs and strays that waft about the conservancy. I have gained a gaggle of geese, a fluffy ginger stray cat and the odd chicken. I have lost my colleague to Cape Town and the Nguni calves I hand-reared to their herd.  Have I been overwhelmed? Slightly yes. Did I stress-eat 24 muffins? Maybe.

My calves have been reunited with their own cow-kind. That day was slightly traumatic. Mainly because of separation anxiety, but also because I fell into the sewage – chasing a calf – who did not collapse the thin roof that covers the river of raw goop that flows underneath the house. Does that make me heavier than a calf or just Irish and unlucky? Helen was gracious enough to stop laughing long enough to hose me down while Fudge and Dawn kicked their little hooves together in Dorothy-like glee behind me. Their tune soon changed when they were herded swiftly up the road to join their old (new) family and it took a fair amount of convincing. Their confused expressions will stay with me forever, but just like that, they were gently ushered over the hill, leaving me standing adrift in the middle of the road, dripping in diluted sewage juice. 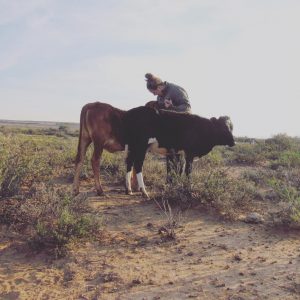 I have found life in the country inconvenient. I had not realised how reliant I was upon instant gratification. With no online delivery or “Woolies” down the road, shopping is done weekly and you take what you can get – except fresh fish, that, to me, just screams salmonella. Just as much as nature is unforgiving and the life lessons being unburdened upon me are not for sensitive hearts (which unfortunately I possess), small comforts are found in hot tea, Ouma rusks and the fascinating abundance of animal life bursting out of the structures that surround me.

Death is no longer an enigma, but common place and must be processed regularly to prevent sinking feelings and misperception. One of the main reasons I chose to work at Karoo Ridge was to immerse myself in the paradox that is farm culture with conservation and everything that comes with it. If I am to succeed in the conservation industry, I must understand and assent to all sides of the story.

What I have found is that Conservation is controversial. To believe it is all about saving lives is naïve and I admit to entering into this career as green as they come. Conservation is about making hard decisions. It is about the greater good, not the individual, no matter how great its personality. It is about circumstance and resources and can be devastating and astounding, disappointing and exhilarating, usually in combination and begs the question, whose side am I really on?

I contradict that sentiment daily. Recently, I aided and abetted a stray cat. A bedraggled specimen, he was discovered  because “someone” stole mince off my sink and only by chance, a few days later,  a ginger blur was sighted galloping into the surrounding vegetation. I began the process of gaining his trust by leaving food out – a dangerous gamble, because who knows what I could attract. I was rewarded however, by a sight for sore eyes and slowly he blossomed. He sleeps in my bed now, and the feeling of  success is sweet, but I also cant help but feel slightly guilty. 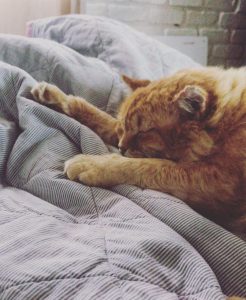 The responsibility is overwhelming at times and with that comes a niggling uncertainty that I’m making the wrong decisions. To find the balance between holding on and letting go is a journey of emotional peril and I’m beginning to realise bravery comes in the form of allowing the possibility of contradiction into your life, accepting both the strengths and weaknesses and learning from the experience.

I am no longer alone, I have fluffy, ginger shaped company currently purring on my lap and a lot of goose poop on the veranda. Has my world changed so much since allowing them into my life? Not really, but their world is now changed for the better and we are all stronger for it.

The Power of Six
Scroll to top